Enlarge (credit: Flickr user Erica Zabowski ) A North Carolina man has pleaded guilty to a conspiracy that illegally accessed the e-mail and social media accounts of Central Intelligence Director John Brennan and other senior government officials and then used that access to leak sensitive information and make personal threats. Justin Gray Liverman, 24, of Morehead City, North Carolina, pleaded guilty to conspiracy to violate the Computer Fraud and Abuse Act, commit identity theft, and make harassing, anonymous phone calls, federal prosecutors said Friday . Among the 10 people targeted in the conspiracy were Brennan; then-Deputy FBI Director Mark Giuliano; National Intelligence Director James R. Clapper; Greg Mecher, the husband of White House Communication Director Jen Psaki; and other government officials. The group called itself Crackas with Attitude, and it was led by a co-conspirator going by the name of Cracka. “She talks mad shit abt snowden,” Liverman said on December 10, 2015 in an online chat with Cracka, referring to a target who is believed to be Psaki, according to a statement of facts signed by Liverman and filed in US District Court for the Eastern District of Virginia. (The document refers to Mecher and Psaki as Victim 3 and the spouse of Victim 3 respectively.) “If you come across anything related to [Victim 3’s spouse] let me know. If you find her cell or home number omg gimme.” Liverman went on to say he wanted to “phonebomb the shitt [sic] outta” Psaki. Read 7 remaining paragraphs | Comments

Visit link:
How hackers made life hell for a CIA boss and other top US officials 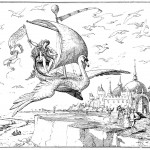