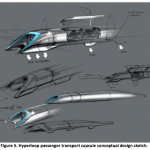 Concept sketches of the Hyperloop passenger capsules; note the air intake noses. Tesla Motors The proposed design for the “Hyperloop, ” an ultra-fast transit system that would run between San Francisco and Los Angeles, was revealed today on Elon Musk’s Tesla Motors website. Musk, the founder of SpaceX and Tesla Motors, describes a system that moves pods under low pressure through a tube between the two cities following the I-5 freeway, all within a 56-page PDF document . The Hyperloop would consist of aluminum pods inside a set of two steel tubes, one for each direction of travel. These are connected at each terminus. The tubes would be positioned on top of pylons spaced 100 feet apart holding the tube 20 feet in the air, and the tube would be covered by solar arrays to generate its own power. Inside the tubes, the pods would carry people up to 760 miles per hour. The pods would each carry 28 passengers, departing every two minutes from either location (or every 30 seconds at peak times). So each pod would have about 23 miles between each other while traversing the tube. The transport capacity would therefore be about 840 passengers per hour. Read 15 remaining paragraphs | Comments

Ubuntu 13.04 available Thursday, brings a streamlined footprint to the forefront