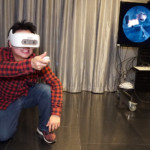 View article:
I can finally do cartwheels in VR with HTC’s Vive Focus