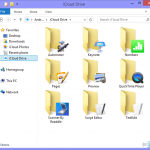 iCloud Drive is now available on Windows, but not OS X. Andrew Cunningham Apple officially released iCloud Drive yesterday as part of the iOS 8 update , but it came with a caveat: turning it on disables the “old” way of iCloud syncing, but OS X doesn’t yet support iCloud Drive and won’t until OS X Yosemite is released later this fall. If you use iCloud to sync application data between your phone, tablet, and desktop, this means you’ll need to keep living with the more limited version of iCloud until Yosemite is out (or roll the dice and give the Public Beta a try ). If you’re a Windows user with an iPhone, though, you can go ahead and pull the trigger on that iCloud Drive update now. Apple today released an updated version of the iCloud for Windows application  that adds full support for iCloud Drive. Install the program and sign in, and iCloud Drive will appear in your user profile folder and your Favorites menu in Windows Explorer, much like Microsoft’s own OneDrive cloud storage service. This is the first opportunity that Windows users will have to view and directly manipulate iCloud data, not counting the more limited capabilities of the iCloud.com Web apps, and it’s a nice new addition for people who like iOS but don’t care to use Macs. Otherwise, iCloud for Windows continues to be more limited than iCloud on either iOS or OS X. It can sync with your Photo Stream and sync Safari bookmarks with either Internet Explorer, Firefox, or Chrome, and if you have Outlook 2007 or later installed it will also offer to sync your iCloud mail, calendars, contacts, and reminders. However, it can’t use iCloud Keychain to sync passwords, nor does it provide any kind of “Find My Device” functionality as it does in both iOS and OS X. You can’t sync Notes data directly either, though that feature is accessible via iCloud.com. Read 1 remaining paragraphs | Comments

See more here:
iCloud for Windows update means PCs can use iCloud Drive before Macs can