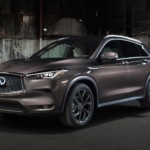 After nearly a year of teasing, Infiniti finally debuted its newest QX50 crossover at the 2017 Los Angeles Auto Show on Tuesday. The vehicle features not only an inline-4 engine capable of adjusting the length of each cylinder’s piston stroke on the fly, it’s also the first Infiniti to incorporate Nissan’s ProPilot semi-autonomous driver assist system. THe QX50 will sport a 2.0-liter inline-4 VC-Turbo engine that generates 268 HP and 280 pound-feet of torque yet will still provide an estimated 27 miles to the gallon (26 MPG if you turn on the AWD). It manages this impressive feat thanks to variable compression design. Specifically, the Q50 will adjust the cylinder compression ratio from 8:1 to 14:1 on demand, enabling it quickly switch between a fuel efficient low-boost, high-compression operation to a more powerful high-boost, low-compression setup — all within the span of 1.5 seconds. Additionally, the QX50 will be the first Infiniti to offer Nissan’s ProPilot semi-autonomous driver assist system, which can already be found in the 2018 Nissan Rogue and Leaf models. Think of the ProPilot system as an enhanced cruise control. It takes partial command of the vehicle’s acceleration, braking and steering operations to maintain your bearing and speed while travelling along the open road. Should traffic slow, the system will automatically reduce the QX50’s speed to keep you from crowding cars in front of you. When the flow of traffic speeds back up, the system will accelerate accordingly. The QX50 is expected to hit dealer show floors in the first quarter of next year.

How the wave of a wand can detect bleeding in the...