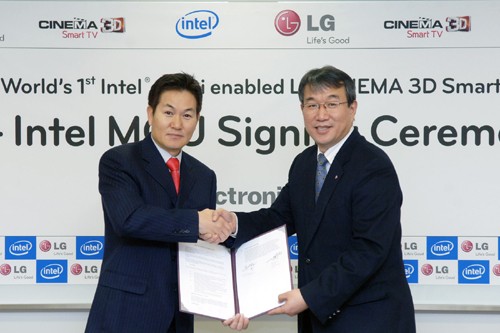 Intel’s Wireless Display tech has promised to pull together properly equipped laptops and nearby HDTV screens since its debut last year, but until now always required an extra add-on for the TV side of the equation. That will change next year, thanks to an agreement by the chipmaker with LG promising its Cinema 3D Smart TV line will be the first ones with WiDi built right in. Just like it does with existing dongles, compatible devices can stream content (including HDCP protected video like DVDs and Blu-rays, as of Sandy Bridge) to the display while displaying something different on their own screen, and don’t require an active WiFi or internet setup to make it all happen. The press release (included after the break) promises demonstrations next month at CES, while some manufacturers like Philips have included similar technology, we’ll see if this becomes a standard feature.

Intel and LG deal brings WiDi streaming to HDTVs without the dongle originally appeared on Engadget on Thu, 15 Dec 2011 07:35:00 EDT. Please see our terms for use of feeds.