Ian Cutress, writing for AnandTech: At Computex a couple of weeks ago, Intel announced its new Basin Falls platform, consisting of the X299 chipset with motherboards based on it, a pair of Kaby Lake-X processors, and a set of Skylake-X processors going all the way up to eighteen cores, denoting the first use of Intel’s enterprise level high core-count silicon in a consumer product. As part of Intel’s E3 press release, as well as their presentations at the show, the new Core i9 processors were discussed, along with Intel’s continued commitment towards eSports. Intel gave the dates for the new platform as the following: 4, 6, 8 and 10-core parts available for pre-order from June 19th; 4, 6, 8 and 10-core parts shipping to consumers from June 26th; 12-core parts expected to ship in August; and 14, 16 and 18 core parts expected to ship in October. Read more of this story at Slashdot. 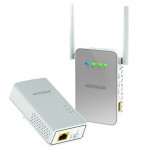 Netgear transforms your power plug into a fast WiFi hotspot

The World’s First Handheld DNA Sequencer Is a Genetics Lab In...

Coinbase Is Making $2.7 Million a Day