MojoKid writes “Low-power parts for hand-held devices may be all the rage right now, but today Intel is taking the wraps off a new high-end desktop processor with the official unveiling of its Ivy Bridge-E microarchitecture. The Core i7-4960X Extreme Edition processor is the flagship product in Intel’s initial line-up of Ivy Bridge-E based CPUs. The chip is manufactured using Intel’s 22nm process node and features roughly 1.86 billion transistors, with a die size of approximately 257mm square. That’s about 410 million fewer transistors and a 41 percent smaller die than Intel’s previous gen Sandy Bridge-E CPU. The Ivy Bridge-E microarchitecture features up to 6 active execution cores that can each process two threads simultaneously, for support of a total of 12 threads, and they’re designed for Intel’s LGA 2011 socket. Intel’s Core i7-4960X Extreme Edition processor has a base clock frequency of 3.6GHz with a maximum Turbo frequency of 4GHz. It is easily the fastest desktop processor Intel has released to date when tasked with highly-threaded workloads or when its massive amount of cache comes into play in applications like 3D rendering, ray tracing, and gaming. However, assuming similar clock speeds, Intel’s newer Haswell microarchitecture employed in the recently released Core i7-4770K (and other 4th Gen Core processors) offers somewhat better single-core performance.” Read more of this story at Slashdot. 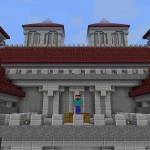 What you need to know about ‘Minecraft’