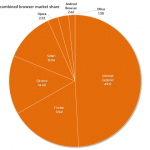 Net Marketshare There were no big changes in the browser landscape in March. The top three held their positions, and Windows 8 continues to grow at a sluggish pace. The biggest change? Internet Explorer 10 almost doubled its market share, thanks to the late February release of its Windows 7 version. Net Marketshare Net Marketshare On the desktop, Internet Explorer saw no meaningful change, at 55.83 percent for the month compared to 55.82 last month. Firefox and Chrome both edged up a little, gaining 0.09 and 0.18 points for shares of 20.21 and 16.45 percent respectively. Safari and Opera both nudged downward, losing 0.11 and 0.08 points to drop to 5.31 and 1.74 percent respectively. Net Marketshare Net Marketshare In the mobile space, Safari bounced back, up 6.38 points to 61.79 percent. After a surprising high last month, Opera Mini fell 4.32 points to 8.4 percent. Symbian likewise dropped from an unusual high, losing about two thirds of its February usage. It fell 0.83 points to 0.54 percent. Android Browser was down, losing 0.96 points for a share of 21.86 percent. Read 6 remaining paragraphs | Comments