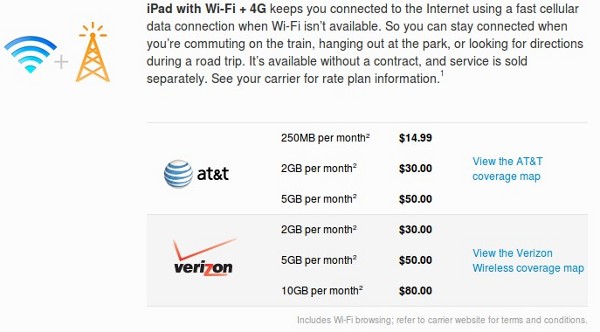 Wondering how much you’ll have to cough up each month, and just how much data it would net you if you opted for a 4G model if Apple’s new iPad? Well, the image above should tell you all you need to know. AT&T will have three options, starting at $15 for 250MB, $30 for 3GB and going up to $50 for 5GB. Verizon simply skips out on the bargain bin plan, assuming you’ll be wanting more if you dropped the extra dough on an LTE-enabled iPad. Big Red kicks things off with a $30 2GB option before jumping to $50 for 5GB and $80 for 10GB. Now, that may sound like a lot of money but, remember, there’s no contract to sign here.

Update: AT&T has reached out to us to identify an inaccuracy presented in Apple’s graphic. The $30 price tier comes with a 3GB data plan, rather than 2GB as originally stated in the article. Apple has yet to update the information on its website.