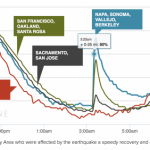 Jawbone’s graph of users who were woken up by the earthquake in California early Sunday. Jawbone Wearable computing company Jawbone released a graph  on Monday showing its users being woken up by the 6.0-magnitude earthquake centered in the Napa Valley region of California on Sunday morning. 120 people were injured, a lot of wine went to waste, and a few people wearing Jawbone’s Up fitness bands lost some sleep, according to a huge spike in the percentage of users who were up and moving in affected regions at about 3:20am (close to 80 percent in Berkeley, Vallejo, and Napa Valley itself). The graph accurately plots the nexus of the earthquake, with smaller spikes of activity in more distant regions, including San Francisco and Oakland (around 60 percent of users), Sacramento and San Jose (25 percent), and Modesto and Santa Cruz, with only a tiny bump of a few percent from the baseline. Together, the locations form a basic map of the earthquake’s reach, not dependent on scientific measurements and existing equipment waiting for a disaster, but just a large, distributed population wearing tracking devices . The Up bands don’t collect location data themselves, so they can’t pinpoint where a user was asleep with perfect certainty. Rather, the data is based on the locations logged by the app used to store users’ information, which always records a user’s location when the app is opened. Read 5 remaining paragraphs | Comments

View the original here:
Jawbone opens a window to our humanity-tracking future 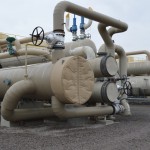 Geothermal energy has success in Nevada, wants to spread to the...