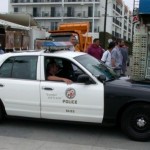 Cliff The Los Angeles Police Commission is investigating how half of the recording antennas in the Southeast Division went missing, seemingly as a way to evade new self-monitoring procedures that the Los Angeles Police Department imposed last year. The antennas, which are mounted onto individual patrol cars, receive recorded audio captured from an officer’s belt-worn transmitter. The transmitter is designed to capture an officer’s voice and transmit the recording to the car itself for storage. The voice recorders are part of a video camera system that is mounted in a front-facing camera on the patrol car. Both elements are activated any time the car’s emergency lights and sirens are turned on, but they can also be activated manually. According to the Los Angeles Times , an LAPD investigation determined that around half of the 80 patrol cars in one South LA division were missing antennas as of last summer, and an additional 10 antennas were unaccounted for. Citing a police source, the newspaper said that removing the antennas can reduce the range of the voice transmitters by as much as a third of the normal operating distance. Read 10 remaining paragraphs | Comments