Enlarge / Courtroom 1 in the René Davidson Courthouse, part of the Alameda County Superior Court in Oakland, California. (credit: Cyrus Farivar) OAKLAND, Calif.—Most pieces of software don’t have the power to get someone arrested—but Tyler Technologies’ Odyssey Case Manager does. This is the case management software that runs on the computers of hundreds and perhaps even thousands of court clerks and judges in county courthouses across the US. (Federal courts use an entirely different system.) Typically, when a judge makes a ruling—for example, issuing or rescinding a warrant—those words said by a judge in court are entered into Odyssey. That information is then relied upon by law enforcement officers to coordinate arrests and releases and to issue court summons. (Most other courts, even if they don’t use Odyssey, use a similar software system from another vendor.) But, just across the bay from San Francisco, Alameda County’s deputy public defender, Jeff Chorney, says that since the county switched from a decades-old computer system to Odyssey in August, dozens of defendants have been wrongly arrested or jailed. Others have even been forced to register as sex offenders unnecessarily. “I understand that with every piece of technology, bugs have to be worked out,” he said, practically exasperated. “But we’re not talking about whether people are getting their paychecks on time. We’re talking about people being locked in cages, that’s what jail is. It’s taking a person and locking them in a cage.” Read 22 remaining paragraphs | Comments 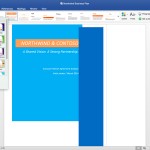 Office for Mac 2016 exits preview, bridges the gap with Windows