mikeebbbd writes: As reported in the Los Angeles Daily News, during the current heatwave various officials swooped down on streets coated with an experimental light-gray sealer that makes the old asphalt into a “cool street” — and it works, with average temperature differences between coated streets and adjacent old asphalt around 10F. At a large parking lot, the temperature reduction was over 20F. If the material holds up and continues to meet other criteria, LA plans to use it on more pavement rehab projects, which could eventually make a difference in the heat island effect. The “CoolSeal” coating is apparently proprietary to a company named GuardTop LLC, costs $25-40K/mile, and lasts 5-7 years. At that price, it’s might not be used a lot, at least at first; typical slurry seals run $15-30K/mile. Read more of this story at Slashdot. 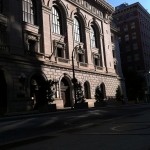 US courts trash a decade’s worth of online documents, shrug it...