An anonymous reader writes: A Michigan man pleaded guilty last week to hacking the computer network of the Washtenaw County Jail, where he modified inmate records in an attempt to have an inmate released early. To breach the jail’s network, the attacker used only spear-phishing emails and telephone social engineering. The man called jail employees and posed as local IT staffers, tricking some into accessing a website, and downloading and installing malware under the guise of a jail system upgrade. Once the man (Konrads Voits) had access to this data, investigators said he accessed the XJail system, searched and accessed the records of several inmates, and modified at least one entry “in an effort to get that inmate released early.” Jail employees noticed the modification right away and alerted the FBI. The man as arrested a month later and is now awaiting sentencing (maximum 10 years and a fine of up to $250, 000). Read more of this story at Slashdot.

MagicPlan Creates a Floor Plan with Your Phone’s Camera 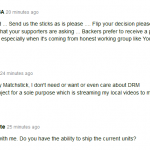