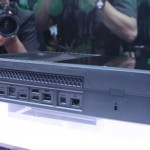 Here’s the money shot: the back of the console has a power connector, HDMI in and out (for the purposes of hooking your cable box up to the console), optical audio out, two USB ports, the Kinect port, an IR Out port, and an Ethernet jack. Kyle Orland The Xbox One is full of technology and after its big reveal, Microsoft talked a little about what’s going into the console, giving some tidbits of info about what makes it tick. Hardware Microsoft says that the Xbox One has five custom-designed pieces of silicon spread between the console and its Kinect sensor. It didn’t elaborate on what these are. There’s a system-on-chip combining the CPU and GPU, which we presume to be a single piece of silicon, and there’s at least one sensor chip in the Kinect, perhaps replacing the PrimeSense processor used in the Xbox 360 Kinect, but what the others might be isn’t immediately clear. Possibilities include audio processors, on-chip memory, and USB controllers. One of the key questions about the AMD-built, 64-bit, 8-core SoC is “how fast is it?” At the moment, that’s unknown. Microsoft claims that the new console has “eight times” the graphics power of the old one, though some aspects of the new system are even more improved; for example, it has 16 times the amount of RAM. Read 13 remaining paragraphs | Comments 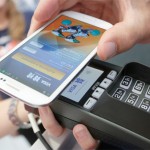 Amazon Launches Anime Channel for $5 Per Month, Its First Branded... 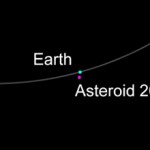