An anonymous reader writes: Mozilla is currently working on a new browser engine called Quantum, which will take parts from the Servo project and create a new core for the Firefox browser. The new engine will replace the aging Gecko, Firefox’ current engine. Mozilla hopes to finish the transition to Quantum (as in Quantum Leap) by the end of 2017. The first versions of Quantum will heavily rely on components from Servo, a browser engine that Mozilla has been sponsoring for the past years, and which shipped its first alpha version this June. In the upcoming year, Mozilla will slowly merge Gecko and Servo components with each new release, slowly removing Gecko’s ancient code, and leaving Quantum’s engine in place. Read more of this story at Slashdot.

U.S. Congressman Wants to Build a Bridge Out of Aircraft Carriers 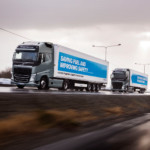 Semi-autonomous truck convoys due to hit UK roads next year