Jeremiah Cornelius writes: “The U.S. Navy’s new railgun technology, developed by General Atomics, uses the Lorentz force in a type of linear, electric motor to hurl a 23-pound projectile at speeds exceeding Mach 7 — in excess of 5, 000 mph. The weapon has a range of 100 miles and doesn’t require explosive warheads. ‘The electromagnetic railgun represents an incredible new offensive capability for the U.S. Navy, ‘ says Rear Adm. Bryant Fuller, the Navy’s chief engineer. ‘This capability will allow us to effectively counter a wide range of threats at a relatively low cost, while keeping our ships and sailors safer by removing the need to carry as many high-explosive weapons.’ Sea trials begin aboard an experimental Navy catamaran, the USNS Millinocket, in 2016.” Read more of this story at Slashdot. 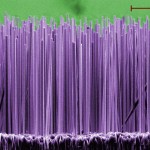 Stretching the limit of silicon nanowires for next-generation electronics