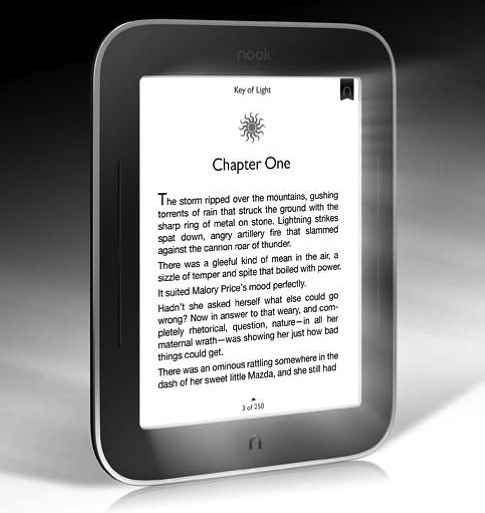 A version of the Nook SimpleTouch is now equipped with front-lighting, Barnes & Noble announced Thursday. The new Nook SimpleTouch costs $40 more than the standard version with the light being the only difference; other features remain the same.

Built-in lighting has become the next logical step for e-ink readers. On April 6, TechCrunch found that Amazon had acquired patents for a front-lighting design in 2010. The company has offered Kindle cases with built in lighting for some time, but on this count Barnes & Noble has beaten Amazon to this feature.

The new Nook benefits from “Flex Lighting,” a thin LED lighting film that sits like a skin on top of the e-ink display. The lighting relies on one or two LEDs, according to The E-Book Reader, and its brightness is adjustable. The standard battery life estimate for a Nook SimpleTouch is two months of one hour of reading per day. Barnes & Noble states the device will still last “over one month” if the reader is using the lighting.

Hilariously, Barnes & Noble is marketing the Nook SimpleTouch toward couples beleaguered by a specific situation—where one person wants to read later than the other (“End bedtime reading debate—when you want to read & your partner wants to sleep,” reads the features list). We expect the Nook SimpleTouch will find a much wider audience, though the $139 price tag is a bit steep compared to the $99 regular Nook SimpleTouch. We’d point out that it’s also only $60 less than the Kindle Fire; which reader you’d choose depends on your dedication to e-ink. The device is available for pre-orders today and will ship May 1.