Researchers at Duke University have developed “spray-on” digital memory using only an aerosol jet printer and nanoparticle inks. An anonymous reader quotes Duke Today: The device, which is analogous to a 4-bit flash drive, is the first fully-printed digital memory that would be suitable for practical use in simple electronics such as environmental sensors or RFID tags. And because it is jet-printed at relatively low temperatures, it could be used to build programmable electronic devices on bendable materials like paper, plastic or fabric… The new material, made of silica-coated copper nanowires encased in a polymer matrix, encodes information not in states of charge but instead in states of resistance. By applying a small voltage, it can be switched between a state of high resistance, which stops electric current, and a state of low resistance, which allows current to flow. And, unlike silicon, the nanowires and the polymer can be dissolved in methanol, creating a liquid that can be sprayed through the nozzle of a printer. Amazingly, its write speed is three microseconds, “rivaling the speed of flash drives.” The information can be re-written many times, and the stored data can last for up to 10 years. Read more of this story at Slashdot. 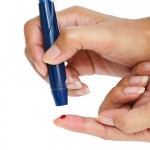 ‘3D printing’ used to test a ‘cure’ for type-1 diabetes

Press Used To Print Millions of US Banknotes Seized In Quebec

This Is the First Building That Can Heal Its Own Cracks...