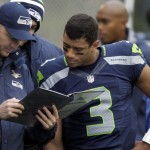 In the first instance of tablets and mobile computing devices being used on the sidelines of NFL games, Microsoft Surface tablets will be used by coaches and players in the upcoming season as part of a reported $400 million multi-year deal between the NFL and Microsoft. The Sideline Viewing System is meant to help coaches and players study their opponents in realtime from the sideline, which… Read More

More here:
NFL Will Let Teams Use Microsoft Surface Tablets On The Sidelines During Games