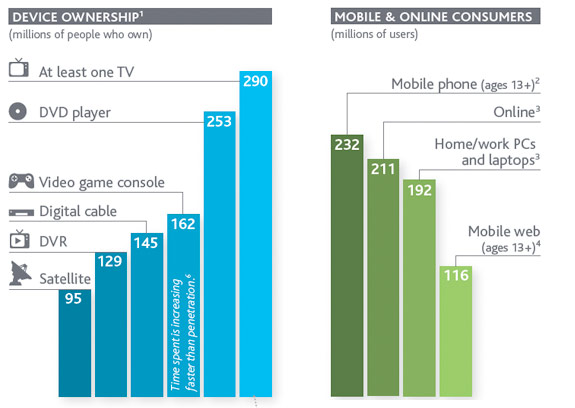 2011’s come and gone, but Nielsen’s media report on the year remains. The latest figures from the year that was have been published, and conventional television is still riding a wave of popularity. We’re told that 290 million Statesiders are still ogling at least one television, with around one in three American homes (35.9 million for the mathematicians) owning four or more of the things. Across the wire, some 211 million Americans are online, with a staggering 116 million aged 13 and up accessing the mobile web. Other figures include 253 million DVD players owned, 162 million game consoles, 129 million DVRs and 95 million satellite subscribers. There’s also some 111 million people watching timeshifted programming, and Netflix itself has four times the average viewing time per person, per month compared to the boob tube. Concerned about mobile? Android’s US market share (again, according to Nielsen) is pegged at 43 percent, while the iPhone has 28 percent and RIM’s BlackBerry OS claims 18 percent. Hit up the links below for more charts, numbers and things that your grandmother couldn’t possibly care less about.