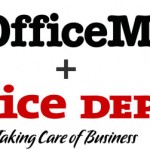 Well, at least they don’t have to change the first part of their names! The Wall Street Journal reported that OfficeMax and Office Depot are merging: OfficeMax Inc. and Office Depot Inc. are in advanced talks to merge, people familiar with the matter said, as the retailers of pens, paper and desks try to fight off tougher competition from rivals like Staples Inc. and Amazon.com Inc. A deal would combine two companies that have been hammered in recent years by weak economic conditions, falling sales and rising online competition. Office Depot’s market value is just $1.3 billion, and OfficeMax’s is about $933 million. Still, the two chains have a substantial retail presence. Office Depot, based in Boca Raton, Fla., has 1,675 stores world-wide, annual sales of some $11.5 billion and about 39,000 employees. OfficeMax, based in Naperville, Ill., has about 900 stores in the U.S. and Mexico, roughly $7 billion in annual sales and approximately 29,000 employees. OfficeMax is scheduled to post its quarterly and annual results Thursday. Link What do you think we should call the new entity?

Read this article:
Office Depot and OfficeMax to Merge

“Neon” screenshots leak, showing off a refreshed Windows 10 look and...