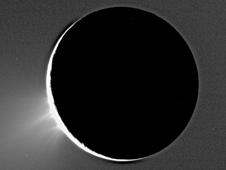 NASA has recently announced that their Cassini mission to Saturn has detected a thin layer of oxygen around the small moon Dione. The layer is so thin they are not calling it an atmosphere, but an exosphere. This is an interesting new piece to a picture that has been developing over the past few years – the chemistry of the Saturn system and how the moons influence the planet and each other.

One reason this is interesting is because oxygen is often thought of as a chemical signature for life. Free gaseous oxygen is highly chemically reactive, which means it won’t hang around for very long. It will react with other substances and be chemically bound. If there is gaseous oxygen in the atmosphere of a planet, therefore, there must be a source of new oxygen being made. On earth the source of oxygen is plant life – plankton and other plants make energy from the sun, take CO2 from the air as a source of carbon, combine it with water and release O2.

This further means that if we find oxygen in the atmosphere of a planet, either in our own solar system or an exoplanet in another solar system, this would be a clue that the planet might harbor life. The other possibility is that there is some chemical reaction going on that is producing the oxygen. That is likely the case with Dione.

Astronomers believe the source of the oxygen is actually the moon Enceladus. This small moon has grabbed headlines recently because astronomers have discovered that it likely has liquid water beneath its icy surface. Cassini has seen jets of liquid water spewing from Enceladus (seen in the image at the beginning of this post). It now appears that the strong radiation belt around Saturn is breaking the water being ejected from Enceladus into elemental hydrogen and oxygen. This oxygen is then making its way around the Saturn system – to Saturn itself and also to the giant moon Titan.

This all means that the chemistry of gas giants and their moons may be more complicated than we previously imagined. We can no longer view each moon or the planet itself as an isolated world, but as part of a complex system. This also means that we have to be cautious if ever we detect oxygen in the atmosphere of an exoplanet. We cannot jump to the conclusion that this means there must be life, because there may be a non-life source of the oxygen. It will still be highly suggestive, however, and worth further exploration.

Even though this oxygen may not be a direct sign of life it does raise the question of whether or not it makes it more likely that there is life on any of Saturn’s moons. Titan, while definitely nothing like Earth, does have an atmosphere and lots of hydrocarbons, and now oxygen. Does the presence of oxygen allow for more varied chemistry an make it more likely that life would develop?

The discovery of life elsewhere in our own solar system would be one of the most profound scientific discoveries ever. Right now every form of life we have ever discovered is related to each other, the product of one evolutionary line on Earth. All life shares the same chemistry and genetics. If we discovered life on Mars, Europa, Titan, Enceladus or elsewhere, for the first time we would have an alien biochemistry to explore. The similarities and differences from Earth life would give us information about life in general that we simply cannot get any other way. It may even be possible that life on Earth and on some other body in the solar system are related, the product of seeding from one world to another. Even the simplest microbes on Titan or Europa would be an incredible boon to scientific discovery.

This discovery would also tell us about the probability of life developing and the range of conditions in which it can develop, which will affect our estimates of how common life is in the universe. Right now, we have an N of 1 – one example of life in the universe. It’s hard to extrapolate from this. Even an N of 2 would make a profound difference.

This discovery comes shortly after NASA announced its latest budget, which in general shifts money away from planetary science toward the development of rockets and peopled missions. I don’t want to get into the debate here about the relative worth of these two distinct missions of NASA, rather I just want to point out that we are reducing our funding of this kind of planetary science just as we are discovering amazing things about our solar system. We are perhaps on the verge of discovering life on a world other than Earth. In my opinion this should have a very high – if not the highest – priority for NASA. The discovery of life would be the greatest contribution to science that NASA has ever made, in my opinion. Now is not the time to scale back. (I know the budget cuts are being imposed on NASA, not made by them.)

This latest finding in itself is very interesting, if an obscure fact of planetary astronomy. But the potential implications are huge, as is often the case in science – one small detail can have profound meaning when put into the broader context of our understanding of the universe.

Read the original:
Oxygen Around Dione