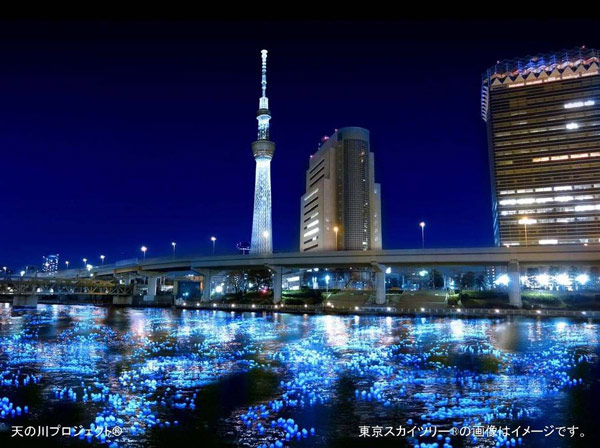 If you’d been by the shore of the Sumida River in central Tokyo this past weekend, you would have noticed that it was glowing a distinct shade of blue. That’s because Panasonic decided to kick off the first-ever Tokyo Hotaru (fireflies) festival by sending 100,000 EVERLED light bulbs down the river, both to mimic fireflies as well as to pay homage to a Japanese tradition of floating candles on the water. Before you cringe too much at the thought of the environmental impact, rest assured that Panasonic minimized the footprint of its aquatic LED parade. All the bulbs ran on solar power (presumably, charged during the day) that kept Evolta batteries fed inside, and the entire lot was scooped up in a large net afterwards. We love the exhibition as a large-scale demo of sustainable lighting — you may just want to avoid fishing along the Sumida’s shoreline for awhile in case you catch a straggler.