Kembrew writes, “I saw your post in Boing Boing today about Pee-Wee, and coincidentally, I just published a piece on Pee-wee’s Christmas Special . I think it’s the first time Paul Reubens has been interviewed about the upcoming remastered Pee-wee’s Playhouse DVDs that will come out next year.” I previously invoked the term “eye-popping” to describe Pee-wee’s Playhouse, but starting next year, viewers will run the risk of having their eyeballs permanently dislodged from their sockets. “The Christmas Special is going to come out, along with the entire Playhouse series, on Blu-ray,” Reubens tells me. “It’s being remastered now.” “The show was never seen on film,” he says. “The show was shot on film and transferred to tape and edited on tape, and all the effects were done on tape. Then the entire show was put on another tape to broadcast, so there are three or four generations of quality that are lost on every episode. So we went back to the original film elements, and the company I’m working with has recreated every edit in every single show, and recreated all the effects from all the original elements—which we were lucky to have kept.” “It looks unbelievable. It’s so extreme, people are going to freak out when they see it,” Reubens adds. “The detail and clarity and color is amazing.” This means that Gary Panter’s set design, the stop motion animation and other details will come alive in psychedelic high definition. It’s the kids show equivalent of being upgraded from cough syrup to mescaline. Pee-wee’s (remastered) Christmas Adventure: An interview with Paul Reubens [Kembrew McLeod/Little Village] 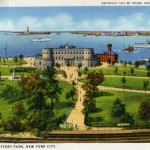 Digital Public Library of America to add millions of records to...