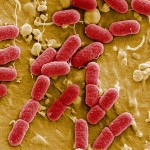 Under the right circumstances, bacteria can be quite cooperative — both with each other and the organism they’re living in . A research team at Rice University has managed to exploit that natural congeniality to, for the first time, create a biological circuit that works much like a conventional computer chip. But the goal of the researchers’ work isn’t to build better biocomputers , it’s to help them more fully understand how these organisms interact within our guts. “They naturally form a large consortium, ” Rice synthetic biologist Matthew Bennett said in a statement. “One thought is that when we engineer bacteria to be placed into guts, they should also be part of a consortium. Working together allows them to effect more change than if they worked in isolation.” To that end, the team’s proof-of-concept model employs two species of genetically engineered bacteria (both variants of the common E. Coli ) that that regulate each other’s production of a specific protein via intercellular signaling pathways. Rice University’s cooperative bacterial colonies – Image Credit: Rice University Specifically, one population, the “activators”, was tasked with increasing the expression of one set of genes while the others, the “repressors, ” acted to down-regulate other genes. Taken together, the circuit generated rhythmic gene transcription oscillations across the entire population. This coordination allows each species to produce the proteins more efficiently than if they did so individually. In turn, that could lead to greater bacterial biofuel production yields. “The main push in synthetic biology has been to engineer single cells, ” Bennett said. “But now we’re moving toward multicellular systems. We want cells to coordinate their behaviors in order to elicit a populational response, just the way our bodies do.” Eventually, these systems could even help us regulate our own internal chemistries. “One idea is to create a yogurt using engineered bacteria, ” Bennett continued. “The patient eats it and the physician controls the bacteria through the patient’s diet. Certain combinations of molecules in your food can turn systems within the synthetic bacteria on and off, and then these systems can communicate with each other to effect change within your gut.” The team recently published their findings in the journal Science . [Image Credit: Getty Images] Filed under: Science Comments Source: Rice University , Science Tags: bacteria, biology, bionics, E. Coli, livingcircuit, riceuniversity

Original post:
Researchers make a living circuit out of bacteria 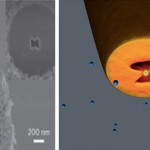