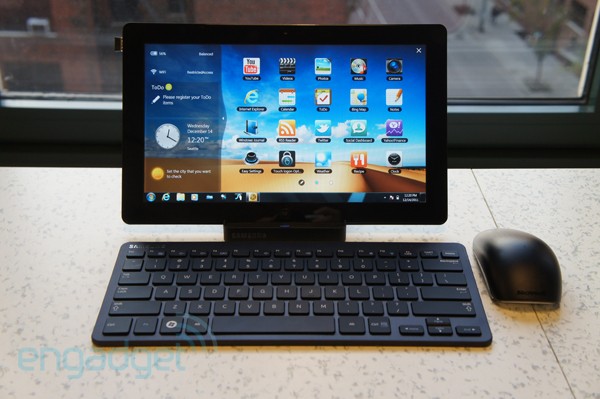 All quiet on the Windows 7 tablet front? Well, no, but we haven’t exactly seen many shots fired lately. Sure, HP recently refreshed the Slate 500 with the Slate 2, but for the most part, products like this have been eclipsed by excitement around Windows 8. Of course, Redmond’s tablet-friendly OS won’t ship for another year, so for now tablet makers are releasing Windows slates with little fanfare. Not Samsung, though. While its mobile team has dug its heels into the consumer tablet market with devices like the Galaxy Tabs 10.1, 8.9 and 7.0 Plus, its PC division is taking a different tack. The Series 7 Slate PC was built by the same team behind the striking Series 9 laptop, making it one of the slickest business tablets we’ve ever beheld. It rocks an 11.6-inch display that handily dwarfs pretty much everything else out there. It runs a Core i5, not Atom, processor, and is offered with a custom dock and Bluetooth keyboard. The Series 7 Slate isn’t just a rare Windows 7 tablet; it’s also one of the most memorable. But are all of those things worth the $1,099 starting price? Could be, but we can think of a few caveats. Allow us to explain.