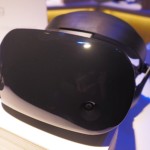 Earlier today, Microsoft and Samsung announced the latest Windows Mixed Reality headset: the Samsung HMD Odyssey . At $499, it’s certainly one of the pricier options out of all the Windows Mixed Reality headsets so far. And for good reason. Not only does it come with integrated AKG headphones — which is very similar to the Rift’s design — it has absolutely stunning image quality. The HMD Odyssey is equipped with dual 3.5-inch AMOLED displays, each of which have a 1, 440 x 1, 600 resolution with a refresh rate of 90 to 60 hertz. The result is a brilliantly sharp and crisp virtual environment — when I took a brief Holotour of Machu Picchu, I genuinely felt like I was there, floating above the mountains on a hot air balloon. Color reproduction is fantastic, and there was none of the screendoor effect that so often plagues VR headsets of lesser quality. The 110-degree field of view also contributes to the feeling of immersion, which is especially apparent when viewing 360-degree videos and photos. Yet, this thing is pretty big. It measures 202mm x 131.5mm x 111m and it weighs in at a whopping 625 grams. That’s definitely a lot heavier than the Acer’s 380 grams. It also just looks pretty bulky on the whole. That said, when I placed the whole thing on my head, it didn’t feel so bad. It fits nice and snug, and I loved the feeling of the leather padding around my head. I could see myself wearing this for a few hours at a time. Other specs of the HMD Odyssey include two cameras on the front, each of which give the headset six degrees of freedom. It also has a proximity sensor, an IPD sensor, a built-in microphone, volume adjustment and a couple of dials that help you find the right fit and focus. I also like it that you can wear the headset while wearing your glasses. During my demo, I had a chance to try out the new Halo Recruit title for a few minutes. As was teased, it’s not quite a game as much as a demo of what Halo could look like in VR. Most of what I did was fire at moving targets in a tutorial phase. I found that targeting is sometimes an issue, as I couldn’t just look at something to aim (like I can with a lot of other VR games) I had to actually really aim at it with my virtual gun. Still, it was just my first experience with it and I can see myself getting better over time. The Halo Recruit demo will be available on October 17th for free from the Windows Store, along with 20, 000-plus other apps made for Windows Mixed Reality. Samsung’s HMD Odyssey is available for pre-order today, with a ship date of November 6th.

Placentas are amazing organs, and we’re learning that they do so...