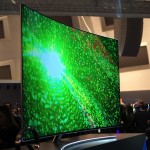 If you’ve been waiting to buy one of Samsung’s QLED 4K TVs , which were unveiled at CES 2017, today is your lucky day. The company is now taking pre-orders for its Q7 and Q8 sets , starting at $2, 500 for a 55-inch, non-curved model. In case that’s not big enough, you could shell out $6, 000 for a 75-inch Q7 or $4, 500 for the curved Q8. What’s missing from this list is the flagship Q9 panels, which Samsung still hasn’t revealed pricing for. As a refresher, the QLED lineup is intended to rival high-end TVs from LG and Sony, with the promise of Quantom Dots delivering a picture quality on par with OLED technology. Samsung says the Q7 and Q8 are expected to ship “late” February. Via: The Verge Source: Samsung