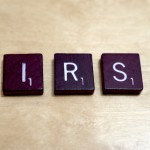 IRS won’t fix database of nonprofits, so it goes dark