There’s something surprising about this sea pig fellow’s family… and it’s not that they are a bit wet, porcine and on the salty side. 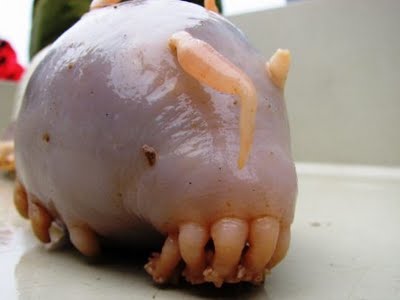 The wee pigs live on the seabed, all pink and podgy tottering around on their wee trotters, slurping up all the gubbins that rains down on the seabed with their piggy snouts. These sea pigs live in odd little herds too, where they bob around eating what not, getting eaten by things and… well… that’s about all we know to be honest. The problem being that it’s rather difficult to stay in touch with piggies that live on the deepest ocean beds, though all is not lost dear reader as thankfully we’ve managed to get to know their relatives. Though as we said they are considered a rather flabbergasting bunch, even when they are at soirees with their salty little hog cousins.

Gaaaaaah one knows what you’re thinking, you think old Pilkie’s going to tell you that as a defence mechanism they belch their intestines out of their anus. Well yes that is indeed surprising, and is quite often cited as the worst party trick in the sea. Though the sea cucumbers have an even more remarkable trick; they can liquidize themselves. Yes of course many animals can liquidize themselves, it’s just that the sea cucumbers manage to act all alive afterwards. Part of their arsenal of trying to not be gobbled down by something, as if hoiking your wibbly insides out in front of a rapscallion isn’t enough. The sea cucumbers, with the aid of a clever compound called ‘catch collagen’ can turn themselves into a bag of soup and pour themselves into a crevice before acting all solid as if nothing had happened. Remarkable, one is sure you’ll agree.

The family of the sea pigs, quite a surprising bunch one is sure you’ll agree… and as for the sea pigs, if you do meet them do tell them to get in touch.