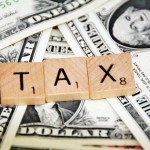 Flickr user: 401(K) 2012 The US Senate passed an online sales tax in a vote this afternoon after a heated final round of debate. A small group of anti-tax Republicans, as well as Democratic Senators from states without sales tax like Montana and Oregon, argued vociferously against the bill—but to no avail. The final vote was 69-27, not much different than the 74-20 procedural vote that took place two weeks ago. The proposal has hardly changed at all in two weeks. The Marketplace Fairness Act, S.743, would allow states and localities to make Internet retailers collect sales tax from their customers if they do more than $1 million per year in out-of-state online sales. “Today the senate is voting to take a few more inches off the little guy,” said Senator Ron Wyden (D-OR), who has fought the bill hard. “You saw ads taken out by some of the biggest businesses in the country. It’s easy to see why Mr. President. With this vote, what you have is big businesses being given the ability to force new regulations onto the start-ups, onto the small businesses.” Read 9 remaining paragraphs | Comments