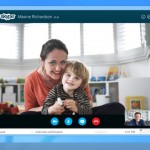 You Can Now Skype From Within a Browser