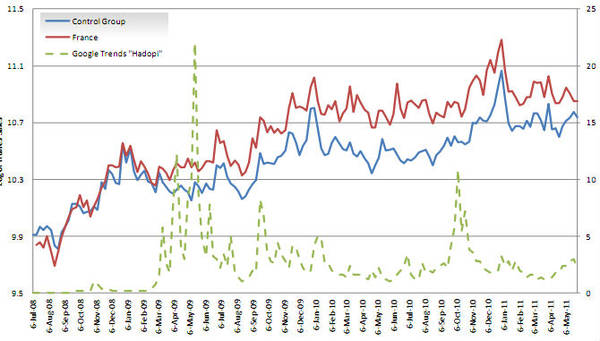 IFPI, the international trade group for the record industry, has trumpeted a study that allegedly shows that France saw a surge in iTunes sales following the institution of a mass-scale regime of “disconnection warnings” — threats to remove you and your family from the Internet if you don’t stop downloading. These warnings are the first step of the controversial HADOPI system, which is the first of a series of global “three strikes” laws pushed for by IFPI.

TorrentFreak had a look at the study, which was written by researches at Wellesley College and Carnegie Mellon, and they found that none of the benefits claimed by the record industry were in its conclusions: “What the researchers found is that in France, compared to five other European countries, more music was sold through iTunes. Looking at the graph below (from the report), it’s clear that the “uplift” in France before Hadopi was introduced (March 2009) is actually much sharper than the two years after.”

“We also estimated the model for the 6 months before and after September 2010, as this was the first month that HADOPI began sending out first notices. In this case, the resulting coefficient was close to zero and statistically insignificant.”

Indeed, when the three-strikes warnings were actually sent out, there was no effect on iTunes sales compared to the control countries. This is unusual, because you would expect that the hundreds of thousands of warnings that went out would have had more of an impact than the ‘news’ that this could happen in the future.

In addition, if we look at the search trends for Hadopi and The Pirate Bay we don’t see a drop in interest for the latter, suggesting that the interest for pirated goods remained stable.

Anti-Piracy Warnings Have No Effect on iTunes Sales

Link:
Study does not show that disconnection threats terrorized France into using iTunes