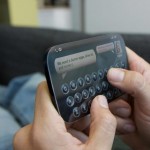 Tactus makes keyboards that appear out of seemingly flat glass touchscreen surfaces, thanks a fluid-based layer that reacts to electrical signals to create rises and bumps that serve as keys and buttons. It’s a magical technology, and one that you can see demoed on video in the clip below from CES this year. Soon, you’ll be able to get that tech on a range of devices thanks to a new… Read More

5 Hidden Windows 10 Features You Should Use