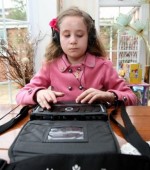 Alexia Sloane is only ten years old, but she got the opportunity to work as an interpreter at the European Parliament in Brussels. Alexia received an exception to the age 14 minimum rule because she is fluent in English, French, Spanish, and Mandarin, and is now learning German -and she does a great job interpreting. Did I mention that Alexia is blind?

Alexia has been tri-lingual since birth as her mother, a teacher, is half French and half Spanish, while her father, Richard, is English.

She started talking and communicating in all three languages before she lost her sight but adapted quickly to her blindness. By the age of four, she was reading and writing in Braille.

When she was six, Alexia added Mandarin to her portfolio. She will soon be sitting a GCSE in the language having achieved an A* in French and Spanish last year. The girl is now learning German at school in Cambridge.

Alexia has wanted to be an interpreter since she was six and chose to go to the European Parliament as her prize when she won a young achiever of the year award.