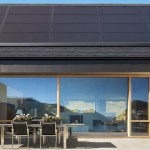 Tesla’s home energy efforts might be centered around its solar roofs , but it knows that not everyone can (or wants to) rip up their roof just to bring renewable energy to their home. To that end, the company is offering a first glimpse at Panasonic-made solar panels that would go on top of your existing roof. Unlike many aftermarket options, this would be relatively slick and unintrusive — the panels have “integrated front skirts and no visible mounting hardware.” While it’ll be patently obvious that you have solar energy on your roof, it shouldn’t be the eyesore you sometimes get with conventional designs. The company is taking requests for custom price quotes right now, but it tells Electrek that production for the 325W modules should start sometime in the summer. You’ll have to be patient if you’re determined to escape the conventional power grid. However, this is definitely not a secondary project for Tesla. The firm says that it’ll use these panels for all new residential projects (outside of tiles), so you’re really looking at the future of Tesla’s mainstream energy tech. Via: Electrek Source: Tesla 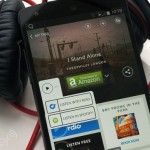 Streaming music sales in the US beat CDs for the first...