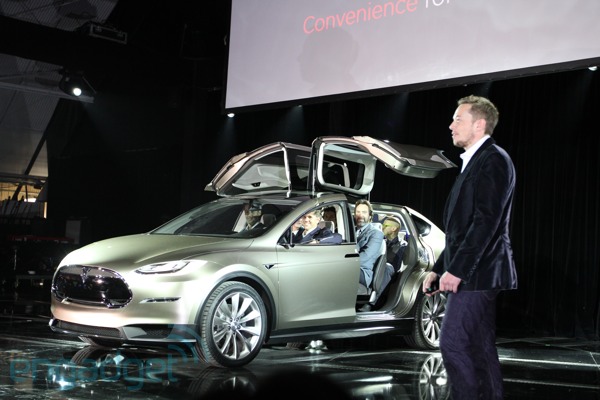 We’re here at the Tesla Design Studio in Los Angeles, where Elon Musk just unveiled his startup’s third vehicle: an SUV it calls the Model X. The ‘ute sports some rather unique looking double-hinged “falcon wing” rear doors which makes loading people and things easier as you reach into the car, not over it. According to Musk they’ll open in tighter spots than a traditional door, opening high enough to fit even a standing human. Powered by an AWD variant of the Model S drivetrain, despite the larger shell, its most performant offering still clocks in at a 4.4 seconds to go from 0-60MPH — matching the most brawny variant of the Model S. And because it’s devoid of a space-hogging ICE, that front portion’s a trunk that Elon lovingly calls the “Frunk.” Per GigaOm, the seven-seater will cost in the $50,000 to $70,000 range, with first deliveries of the “Signature Series” arriving in 2013 before mass production begins in 2014. If that sounds like you’re kind of beat, Those interested can begin reservations on Tesla’s website tomorrow at noon.

Tesla unveils Model X SUV, wants to be your all-electric crossover originally appeared on Engadget on Thu, 09 Feb 2012 23:40:00 EDT. Please see our terms for use of feeds.