Over the years, Apple may have improved security, filters, and screening process of apps for its Mac’s App Store, but even today things the quality of fraudulent apps continue to not only seep through its gatekeepers, but often times outnumber the good apps. How To Geek did some investigation over this and published the findings yesterday in a story titled, “Don’t Be Fooled: The Mac App Store Is Full of Scams”. It didn’t take long for the publication to find scam apps on Apple’s marquee app store for Mac computers. A search for “Microsoft Excel”, for instance, returns “Office Bundle” made by a third-party. The app offers templates — and just that — for $30. Same is the case with any Office suite application. This might not seem as a real problem to many, but as How to Geek points out, there is one more problem: almost all these apps have icons and title names that are similar to those of Microsoft’s, and Apple has had no issues with that. From the article: Let’s be blunt: these customers were ripped off, and Apple pocketed $10 each (Editor’s note: Apple charges 30 percent on all transactions on App Store(. And you’ll only see these comments if you scroll past the two five star reviews that mention the word “app” numerous times. All of these fakes use Microsoft brands like Office, Word, and Excel in the product names. The logos aren’t one-to-one copies of Microsoft’s official logos, but they’re almost always the correct color and letter (blue “W” for Word, green “E” for Excel, etcetera). Read more of this story at Slashdot.

Read More:
The Mac App Store Is Full of Scams 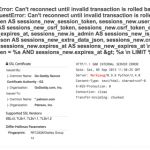 Patreon was warned of serious website flaw 5 days before it...