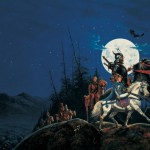 Cover art for the first Wheel of Time novel. (credit: Tor Books) After a rough false start , it looks like Robert Jordan’s fantasy epic  The Wheel of Time will be coming to television after all. The news was delivered on the series’ Google+ page by Jordan’s widow, Harriet McDougal, who owns the copyright to the novels and has controlled the franchise’s direction since Jordan’s death in 2007. We have few details about the project at this point, aside from assurances that a “major studio” will have more to share soon: Wanted to share with you exciting news about The Wheel of Time . Legal issues have been resolved. The Wheel of Time will become a cutting edge TV series! I couldn’t be more pleased. Look for the official announcement coming soon from a major studio —Harriet Optioning  The Wheel of Time makes sense, given the appetite for TV adaptations of dense, sprawling fantasy series. HBO’s  Game of Thrones  and Starz’s  Outlander have both been successful, and  Wheel of Time  is a firmly established property that has the added benefit of actually being a finished story already. Read 1 remaining paragraphs | Comments

View article:
The Wheel of Time turns… into a “cutting-edge TV series”