Hugh Pickens writes “Richard Anderson reports on BBC that despite stringent carbon emissions targets in Europe designed to slow global warming and massive investment in renewable energy in China, coal, the dirtiest and most polluting of all the major fossil fuels, is making a comeback with production up 6% over 2010, twice the rate of increase of gas and more than four times that of oil. ‘What is going on is a shift from nuclear power to coal and from gas to coal; this is the worst thing you could do, from a climate change perspective,’ says Dieter Helm. Why the shift back to coal? Because coal is cheap, and getting cheaper all the time. Due to the economic downturn, there has been a ‘collapse in industrial demand for energy,’ leading to an oversupply of coal, pushing the price down. Meanwhile China leads the world in coal production and consumption. It mines over 3 billion tons of coal a year, three times more than the next-biggest producer (America), and last year overtook Japan to become the world’s biggest coal importer. Although China is spending massive amounts of money on a renewable energy but even this will not be able to keep up with demand, meaning fossil fuels will continue to make up the majority of the overall energy mix for the foreseeable future and when it comes to fossil fuels, coal is the easy winner — it is generally easier and cheaper to mine, and easier to transport using existing infrastructure such as roads and rail, than oil or gas. While China is currently running half a dozen carbon capture and storage (CCS) projects — which aim to capture CO2 emissions from coal plants and bury it underground — the technology is nowhere near commercial viability. ‘Renewed urgency in developing CCS globally, alongside greater strides in increasing renewable energy capacity, is desperately needed,’ writes Anderson, ‘but Europe’s increasing reliance on coal without capturing emissions is undermining its status as a leader in clean energy, and therefore global efforts to reduce CO2 emissions.'” Read more of this story at Slashdot.

Follow this link:
The World Falls Back In Love With Coal

Turning a Kindle Fire HD Into a Power Tablet 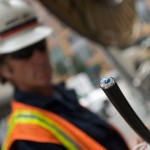