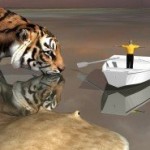 Add / Remove Artists and creatives have always been able to translate imaginative ideas into physical visuals using skills such as painting and sculpturing, but technology such as 3D printing has been democratizing some of the modes of creating. We have already seen ThinkerThing — a system that uses neurosensory tech to enable users to 3D print physical manifestations of their imagination. Now, WordsEye is an incredibly accessible online tool, which enables users to experiment with digital art by turning their words into surreal images. To begin, users register on the Beta version of the program. They can then create an image through language by inputting sentences that include nouns, adjectives and measurements. The program automatically recognizes the different elements of speech and translates the description into a visual. For example, if the user types ‘the small striped elephant is 3 feet in front of the red house,’ WordsEye uses speech tagging and analysis to produce that image, filling in any missing details itself. WordsEyes stores a vast database of language and its corresponding imagery and will eventually be built out with suggestions from users too. Initially conceived as a fun, creative tool for self expression, the program could also be used as an educational tool to assist with literacy, teaching new languages or to empower those with physical disabilities. WordsEye is expected launch as an app for iOS and Android in the near future. How else could the tool be used? Website: www.wordseye.com Contact: type-a-picture@wordseye.com The post Tool translates sentences into a picture appeared first on Springwise .