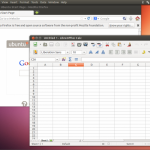 Ubuntu 13.04. Ubuntu 13.10 (“Saucy Salamander”) is scheduled for a final release on Oct. 17, but the OS won’t include what was perhaps the biggest and most controversial change planned for the desktop environment. Canonical announced in March that it would replace the X window system with Mir, a new display server that will eventually work across phones, tablets, and desktops. It has proven controversial, with Intel rejecting Ubuntu patches because Canonical’s development of Mir meant it stopped supporting Wayland as a replacement for X. Mir will ship by default on Ubuntu Touch for phones (but not tablets) this month, allowing a crucial part of Ubuntu’s mobile plans to go forward. However, it won’t be the default system on the desktop, because XMir—an X11 compatibility layer for Mir—isn’t yet able to properly support multi-monitor setups. This is a step back from Canonical’s original plan to “Deliver Mir + XMir + Unity 7 on the [13.10] desktop for those cards that supported it, and fall back to X for those that don’t.” Read 5 remaining paragraphs | Comments