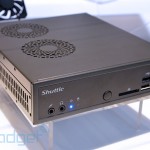 Shuttle runs a Haswell Core i7 in a case barely bigger...