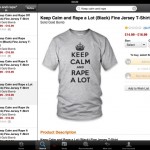 How an algorithm came up with Amazon’s KEEP CALM AND RAPE...