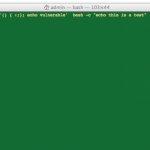 Mac OS X Mavericks is also a *nix, and also vulnerable to the Bash bug. Sean Gallagher Update: The Bash vulnerability, now dubbed by some as “Shellshock”, has been reportedly found in use by an active exploit against web servers. See Ars’ latest report for further details. A security vulnerability in the GNU Bourne Again Shell (Bash), the command-line shell used in many Linux and Unix operating systems, could leave systems running those operating systems open to exploitation by specially crafted attacks. “This issue is especially dangerous as there are many possible ways Bash can be called by an application,” a Red Hat security advisory warned. The bug , discovered by Stephane Schazelas , is related to how Bash processes environmental variables passed by the operating system or by a program calling a Bash-based script. If Bash has been configured as the default system shell, it can be used by network–based attackers against servers and other Unix and Linux devices via Web requests, secure shell, telnet sessions, or other programs that use Bash to execute scripts. Read 8 remaining paragraphs | Comments

Visit link:
Update: Bug in Bash shell creates big security hole on anything with *nix in it