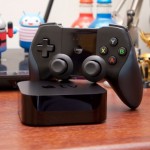 Enlarge / The Apple TV and the Horipad Ultimate MFI controller. (credit: Andrew Cunningham) For those of us fortunate enough to have the privilege, late December and early January bring two things: new toys and a bit of vacation time. That makes it a great time to tinker with little tech projects, things that are inessential and maybe a bit time-consuming but fun enough and useful enough to be worth doing. One of my projects was to experiment with classic console emulators on the new Apple TV . There aren’t many of them yet, and installation takes a little work (Apple doesn’t allow emulators in the App Store), but new capabilities introduced in iOS 9 and the iOS-based tvOS make it possible to install them. Emulation and the Apple TV Right now there are two notable emulation projects targeting tvOS. One is a distant relative of the MAME arcade emulator , though it doesn’t seem as though it’s being maintained. Another, Provenance , is the one we’ll be spending the most time with. It’s a multi-system emulator that supports most major 8- and 16-bit consoles, including the NES, SNES, Sega Master System, Sega Genesis, Sega CD, Game Boy, and Game Boy Advance. Read 17 remaining paragraphs | Comments