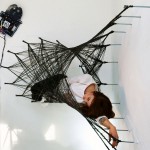 You can mock impractical architecture, but there’s no denying it pushes design and technology in new directions. Case in point is a project from the University of Stuggart’s Institute for Computational Design (ICD) called the “Mobile Robotic Fabrication System for Filament Structures.” Created by grad student Maria Yablonina, it uses robots that crawl on walls to weave carbon fiber filaments into Spirograph-like forms. “Its main advantage is that you can build entirely new structures that would be impossible to materialize otherwise, ” ICD director Achim Menges tells Dezeen . Two robots pass carbon fiber threads back and forth to weave the pattern, then attach it to wall anchors, as shown below. The web-like structures can be built on up to four walls simply by adding more bots. The powerful vacuum fans require external power, so the team’s next step is to extend the range and the number of robots that can be used. The “swarm construction” method is good for more than creating really strong hammocks. ICD has already built architectural roofs and high-tech building envelopes out of carbon fiber using traditional methods and industrial robots . However, Menges thinks the smaller, Roomba-like devices will expand the possibilities. “One can conceive more intricate, differentiated and larger architectural systems beyond the limits of the workspace and the reach of typical industrial machinery, ” he says. Via: Techcrunch Source: University of Stuttgart