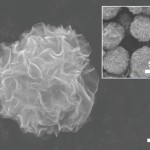 Deep-fried graphene may be the key to long-lasting batteries